The Three Pagodas Of Dali 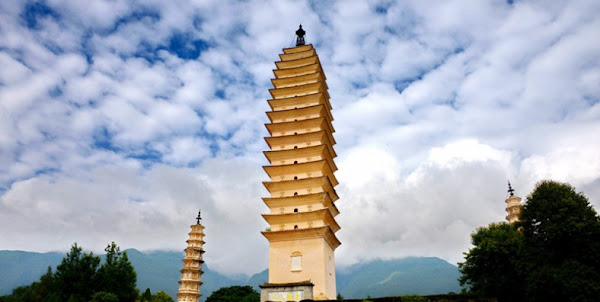 The Three Pagodas of Dali Museum in the Chinese capital of Beijing are an impressive ensemble of three pagodas arranged around the corners of a rectangular equilateral square, within the ancient city of Dali, Yunnan Province, China, dating from the later period of the Song dynasty. The exact location and the origination of these three magnificent pagodas are still poorly known. However, they were certainly built during the late thirteenth century by the Ming Dynasty. The three pagodas share a common central nucleus, which includes a large inner courtyard surrounded by pavilions and a grand hall.

This three pagoda complex is the largest single structure in all of Asia and is made up of two hundred and sixty-three separate pavilions (or seats) and one hundred and forty-two nooks or levels. The interior walls of these pavilions were painted white and decorated with frescos of tortoiseshell. A unique feature found in many of the Three Pagodas is the presence of a colossal dragon statue on the top of each pagoda, symbolizing Buddha. These dragons are considered very protective and auspicious and are linked with the Buddhist doctrines of compassion and love.

The main nucleus of the Three Pagodas was, as it is for the rest of its history, a major administrative center that served as the nucleus of government and military power in China. The city of Dali was located in a strategic location and was strategically important in terms of trade and the importing and exporting of goods throughout China. The Three Pagodas were constructed to house the numerous treasures accumulated by the powerful warlord and his architects, including sculptures depicting scenes from battles fought by the Ciani troops against the Ming Dynasty's army. Although the exact location of Dali's Palace is not precisely located, it can be pinpointed through the existence of a number of landmarks located around the city which point to the exact location of Dali's Palace: The Great Hall of China, The Three Pagodas, and the Opera House. Some of these landmarks also contain priceless works of art and works of architecture by famous Chinese artists such as Huang Di invention The Great Hall of China.

The Three Pagodas and their gardens surround the original palace of Dali and the gardens were designed to be situated at approximately equal height to the Great Hall of China, a fact which helped to maximize the amount of light and provide an easy way to get around. The structure of the Three Pagodas themselves is comprised of numerous pavilions or levels within the main pagoda and interconnected through hallways and passageways carved into the mountainside. Each level contained a different theme, such as a small alcove containing a small collection of mummified human heads, or a set of small workshops with their tools and equipment. Another pavilion was the dining area and a third pavilion provided a resting place for the Emperor who slept in this pavilion.

The gardens surrounding the Three Pagodas of Dali did not remain just ornamental but also functional. The gardens included small streams and fountains, small trees that provided shade for the Pagoda workers, a large water fountain, and a bridge spanning the River Kwai so that animals could cross over to the next level. The construction of the gardens also had practical benefits; by creating a large space for bathing and relaxing in the morning, the workers of the Three Pagodas could spend the day washing dishes and cleaning the large house without being interrupted by outside distractions such as people or vehicles.

The interior of the Three Pagodas was similarly designed as the exterior, with large halls and grand chambers that were fitted out of marble and glass. These served as reception areas and were also used as living quarters for the concubines of the Maoists. They were warmly decorated, with furniture including heavily carved chairs and tables, rich fabrics, and richly embroidered pillows. They also had small bathrooms inside the pagoda compounds so that the concubines would have their own restroom facilities during their stay.